How to train while having fun? Do you want to get out of your training routine by varying your sessions and giving a more playful look? Try the FARTLEK!

Formalized by the Swedish coach Gosse Holmer and popularized by Gösta Olander in the years 1920-40, the term "fartleck" applies to a work of variations of gaits and exercises in kind. It appeals to the sensations of the runner and is enriched by the characteristics of the terrain.

A new way to train

This consists in achieving alternations of more or less controlled gaits. A session is presented as a racing game that allows a certain freedom. The athlete can take advantage of his form of the moment, the terrain (maintaining speed in the ribs for example) or the training teammates (one rider accelerates and the others must follow ...).

Usually we talk about qualitative work, fractional or hard resistance. It is mainly a question of running at a fast pace (in relation to one's own level) during short periods between-cut moments of recovery. Very often, this type of session is carried out on track: 8x200m, 10×400m, 5×1000m ... For many runners, it's the chore. Very few appreciate these difficult but also very codified sessions.

So we have, with the fartlek, a way to train just as effectively, but without the constraints of a session too rigid on track.

After 20 to 30 minutes of warm-up in fundamental endurance, you will accelerate the pace over a certain period of time and then recover a few moments in endurance, and then you start running again at a good pace before releasing again to recover. The fast-paced racing portions can be made on the flat, uphill, downhill, or even a mix of everything. There is no rule. You have to run to the sensations. Do not start too fast at the risk of grilling after only two or three accelerations, but run the fast portions at a pace high enough to raise the cardio higher and higher during the session.

Improvisation in a controlled way

The objective is to reproduce an effort similar to what could be done on the track but without the rigidity of a session scheduled in advance. For a fartlek session, there is no need to predict in advance what we will do. We improvise! We start slowly to warm up, then we improvise continuously until we are satisfied with his session. We must finish with the feeling of having sent well! 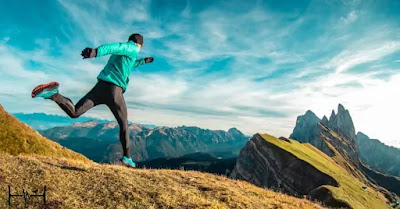 But what do we improvise on? On everything! On the duration of the fast portions, on the pace to be held, on the duration of the recovery. You have to have fun, play with the field that presents itself. For example, at random from the exit, you spot in front of you a flat portion of 200m followed by a small climb of 100m. All right, so let's go. On the flat, you accelerate the pace (about 95% VMA) and you give it a shot to climb the coast without bending and remaining dynamic on your supports.

Example of a fartlek session

The example that will follow is not to be followed scrupulously, it is just there to give you ideas. In addition, it is difficult to know precisely how it looks when running in nature, far from the landmarks of the track. It is with the experience and especially the sensations of the moment, that one must adjust the paces of races according to one's own objectives and the desire of the moment.