Studies show that kettle bells allow you to train more intensely than more traditional bodybuilding programs, and in less time 1.
On the other hand, a kettle bell workout can burn up to 20.2 kcal per minute  (that's about the same as running for 6 minutes). According to the researchers, this higher calorie expenditure is due to the strain on almost every muscle in the body when using kettle bells.

Kettle bells also use more “functional” ranges of motion than regular dumbbells, which helps strengthen the muscles used naturally in everyday life. In addition to that, they allow to work not only the large muscle groups, but also the small “stabilizer” or tightening muscles (such as those of the forearms, arms and hands).

The history of the Kettlebell 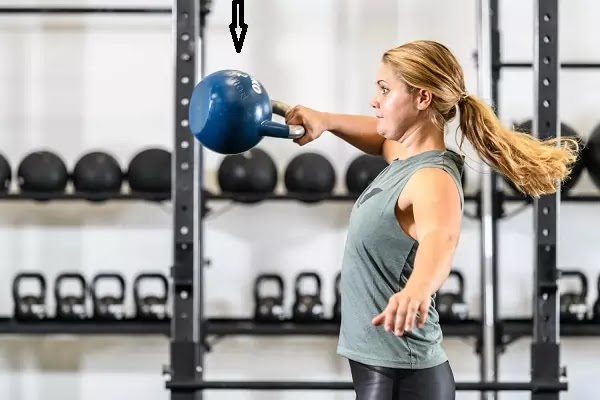 Part of the kettlebell myth lies in its humble origins. Kettlebells first appeared in Russia in the 18th century, where they served as a counterweight to weigh grain and other goods.

Soon the farmers challenged themselves to lift the heaviest, and these kinds of cannonballs ended up in the hands of the strongest men.

After World War II, Soviet Red Army soldiers adopted kettlebells as a weight-training aid, and in the 1970s “kettlebell lifting” became the official sport of the Soviet Union.

Although kettlebells have been available in France since the 1940s, they have seen a resurgence in popularity only since the 2000s and are now used in many CrossFit or cross training boxes and gyms.
Kettlebells vs. Dumbbells
You might be wondering if a kettlebell isn't like a dumbbell? In some ways they are the same, but what makes the kettlebell different is its shape. It may look like an ordinary cast iron weight, but its U-shaped handle transforms the way the load behaves.

The dynamics of the many kettlebell movements create centrifugal force, concentrating more tension in the muscles used for deceleration and stabilization. This type of multidirectional movement mimics real-life movements such as, for example, the swinging of a suitcase to put it on a shelf.

Dumbbells are great for building muscle with slow, controlled movements, while kettlebell training involves the whole body and focuses on resistance, power, and more dynamic movements.

What are the advantages ?

What distinguishes the kettlebell from its cousin the dumbbell is the specificity of its load. Since the center of gravity of a kettlebell is six to eight centimeters away from the handle, this makes it more difficult to handle.

Therefore, virtually any exercise you do with it, whether it is push-ups or crunches like squats, is going to require a stricter execution and more muscle activation than if you were using a dumbbell.

Take the example of the military press with kettlebell. With bars and dumbbells, many people do incomplete extensions. But with the kettlebell, everyone will instinctively want to push towards the load upwards, because the offset load acts as a counterweight, pulling the shoulder back.

In other words, the kettlebell inspires you to exercise perfectly.

Another example with squat movements with a kettlebell held in front of you. The latter will force you to descend further back and push with your heels (to compensate for the counterweight), which improves your squat technique.

As mentioned above, lifting a kettlebell above the head creates a certain propensity to flare the ribs, or to lean backwards, which requires the muscles of the body to be tightened as much as possible. the abdominal strap to ensure balance.

During the kettlebell swing, it is important to maintain the core to stabilize the body and ensure proper execution of the movement: it is not optional as it is with other free weights or some weight machines.

For any athlete, kettlebell training helps challenge the center of gravity of the moving mass.

Other objects, whether it is a ball, an obstacle or an opponent, rarely remain stationary during a match or competition. Using kettlebells teaches your body to stabilize and build strength despite the chaotic movement.

Plus, exercises like kettle swings, cleans and jerks, and snatches (the latter two are easier to do with kettlebells than with a loaded bar) build power that can translate directly into a sport.

If your workout lacks explosive movements, kettlebells are a great place to start.

The kettlebell handle, combined with the shifted load, requires your fingers, hands, and forearms to work harder to control it compared to a dumbbell.

While some manufacturers offer a thick grip, a narrower grip will make it easier to perform more complex movements, allowing you to have more training options.

Since grip strength (grip) is important in most sports as well as for general strength gain, kettlebells have proven to be critical equipment for many athletes.

Most kettlebell exercises involve the entire body, and many, like the classic clean and press and snatch, involve lifting the load off the ground above the head. Working the muscles of the body over such a range of motion creates enormous demand on the heart.

Therefore, many athletes use kettlebells as the cornerstone of their fitness programs.

A 2013 study by the University of Wisconsin-La Crosse looked at the effects of kettlebell training on healthy people, men and women, ages 19 to 25, all of whom were experienced in bodybuilding.

Participants tested their strength, aerobic capacity and balance using conventional exercises and then spent eight weeks training with kettlebells, performing swings, snatches, and cleans and presses. Their progress was then assessed using the same tests.

The result ? The strength of people increased, especially the sheath strength which jumped by 70%. Aerobic capacity also increased by 13.8%.

The balance of participants also improved significantly, which is especially valuable for athletes in many sports.

Different ways to use kettlebells

If you're a lifelong practitioner who finds that years of strength training have caused muscle imbalances and caused injury, kettlebells can play a key role in a harmonious rebalance.

If you're not ready to do a full kettlebell program, you can always at least start your workouts with a kettle exercise to improve your mobility, which will allow you to perform your strength movements in positions. more suitable. This way your technique will only be better when you have to deal with a heavy load.

The kettlebell, even though it's lighter than you're used to, will give you enough difficulty to challenge and stimulate your nervous system.

So before doing back bar squats, try doing kettle goblet squats holding the low position for a few seconds to work on your hip mobility.

And before a session for your shoulders, you can also do one-arm kettlebell presses (as a warm-up) before a military press, for example.

To Do A Full-Body Workout

All you have to do to do a kettlebell workout that works all the major muscle groups is “squats, swings, and clean and jerk”.

You can also do less technically complicated variants such as deadlifts, one-sided rowing with kettle, simple overhead presses, etc.

With An Intensive Tabata-Type Circuit

The HIIT and tabata are powerful tools to burn maximum fat in no time!

Swings will increase your heart rate just as well as any cardio machine or jump rope exercise! The advantage is that they are much more fun and challenging!

Try doing a HIIT circuit with swing reps as you rest between sets of a weight lift. You'll understand what it's like to work hard on cardio!
“Variety and the fun of working out is one of the many keys to success in bodybuilding, and I find that kettlebells are sadly underrated for both of these criteria.”

The swing involves throwing the kettlebell at shoulder height. It is a formidably effective exercise when performed with the right technique. This movement is two in one in the sense that it allows to combine intensive muscular work and cardio-training work.

This exercise is considered the best performing kettlebell movement because it involves the power of the whole body. It therefore allows for extreme fat loss. It is also the basis of all ballistic kettlebell exercises.

Although it seems easy to perform, the swing can take a lot of time, practice, and coaching to perfect. Unfortunately, this exercise is often performed incorrectly which will limit the results.

The squat is a fundamental movement with many variations. The goblet squat with kettlebell is not just a leg exercise - it's a real balance exercise for the whole body that will improve your mobility.

This ability to move more easily will allow you to train safely with heavier loads.

To optimize strength and leg development, there's no denying that the bar squat is king, but the goblet squat is a nice addition. Learning to master safe and efficient trajectories is also a prerequisite for progressing with other kettlebell exercises.

On top of that, this is one of the easiest kettlebell exercises to learn and immediately apply in your workout, so why not take advantage of it!

Turkish get-up is a deliberately slow movement that has been practiced for centuries. To achieve this, you will start by lying on the floor, then you will stand up, then you will lie down again in a specific sequence of movements.

This exercise will help you perform functional movements and more advanced exercises. It will teach you to move smoothly, and when you add weight, it will require more strength, more mobility and more precision.

It is a very versatile exercise that requires special attention to detail and respect for the movements of the human body.

For strong and resistant shoulders, greater strength of the hips and trunk, increased mobility: the Turkish get-up is remarkable.

If you can do the first three exercises, and have good mobility and shoulder stability, the shoulder press with kettle or kettlebell press is another great movement to learn.

Although it looks like a classic press, it is not a simple shoulder exercise because you are using your whole body to get maximum power and muscle strength.

In addition, the fact that the center of gravity of the weight is not in the center of your hand requires greater recruitment of the deltoid muscles to stabilize the load.

Similar to the kettlebell swing, the clean is another explosive exercise that builds strength and builds muscle throughout the body. The difference here is that the kettlebell ends up in an upright position instead of being thrown horizontally to the body.

The clean can take a while to learn, but once you've mastered it, it's a must-have movement for building your fitness.

This exercise can be done on its own, but it's also great with a more complex movement like the clean and press, which is considered one of the best bodybuilding moves.

The kettlebell snatch, sometimes called the Tsar of kettlebell exercises, is the ultimate demonstration of whole body power. To be clear, this has nothing to do with a bar snatch except that it starts with the weight in the down position and is thrown overhead.

This variant of weightlifting exercise is physically and technically very demanding, but offers exceptional benefits in terms of strength and muscle building. It can help you transcend your athletic performance, build explosive strength, and build strong, powerful shoulders .

It is really the secret weapon that will allow you to relaunch your progress during a period of stagnation.