From the day you first lifted dumbbells, you've probably been doing the same pattern every workout: an unchanging number of sets and reps. Fans of training with a progressive load have always used this proven formula: their bodybuilding program is based on a determined number of series for each muscle group, each series corresponds to a given range of repetition.

This approach is logical and allows, over time, to increase the resistance by simply increasing the load. (When 12 repetitions of vertical pulling becomes fairly easy to perform, we switch to a heavier load with which we do not exceed 10 reps).
In terms of priority, the number of sets per exercise comes first, followed by repetitions, which itself depends on a variable load. It's very simple… and effective! However, there is an alternative to this conventional method: decreasing series .
This technique provides unprecedented gains in muscle mass and endurance. This involves performing, during a session, a number of repetitions fixed in advance for an exercise while reducing over five weeks the number of sets necessary to achieve this objective.
The same load is kept for an exercise during the entire session as well as for the entire program.
This saves time when the room is crowded: if we keep the same load from the first series to the last, there is no risk of someone else storming the bench. one uses. You will increase the load at the end of each five week cycle which will alternate with periods of 6 to 8 weeks of more conventional training. Such periodization prevents the muscles from adapting to a certain type of stress.

Analysis of the volume and endurance program

From week to week, three parameters remain constant and two change. As we have explained, you will maintain your chosen workout load from the start to the end of the cycle. In addition, the recovery time between sets remains 1 m 30 s.
What is changing? Answer: the number of sets and repetitions .
Each week, we change the number of sets and repetitions that compose them. A few series of tests may be necessary to determine the load with which positive failure is achieved at the twentieth repetition.
However, for this program to be effective, it is essential to continue until muscle failure. Stopping after 20 repetitions just because you have reached the number 20 is absurd: you will be using a load heavy enough for muscle fatigue to occur after this number of repetitions.
After the first set, recover for 1m 30s so as to allow the muscles used to rest before attacking the second set. This is when you may realize that the range of reps we suggest you do not match your strength level.
As a starting point, we have given an example of decreasing ranges which vary from series to series. You will proceed in the same way. You may not be able to do 14 reps instead of the 16 listed in the second set of week 1 (or you may be able to do 17).
It doesn't matter, because the main thing is to achieve muscle failure anytime. You may need seven sets in week 1 to hit 65 reps. 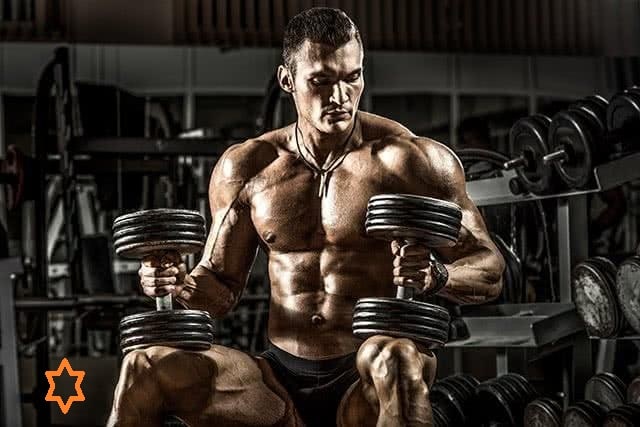 Over the weeks, you will increase the intensity of the sessions doing your 65 reps over fewer sets, which translates into an increase in the number of reps per set, with the recovery time still being 1 m 30 s.
Remember, the goal is to achieve 65 reps in all.
If you have enough energy to pull off a few more reps in the last set of the program, don't waste it. You seek to condition your body for a specific purpose; doing more could cause overtraining .
As you progress through this strength training program with decreasing sets, you will notice two things: unprecedented muscle burn and an improvement in your cardiovascular health.
Those who have been following more conventional bodybuilding methods for a long time will have accustomed their muscles to a certain volume of work: their muscles are therefore conditioned to fail after an x ​​number of sets and repetitions. The body responds physiologically to, say, four sets of 10 repetitions, and it is prepared week after week to put on that effort, but no more.
Faced with a variable repetition pattern and an increasingly different number of sets, this program is sure to force the muscles to “think” in a way. Just like the brain when it is confronted with a riddle, the muscles will begin to seek a solution to the new stress imposed on them. For them, the solution is to gain weight and gain strength .
Likewise, when faced with 65 repetitions instead of the usual 40 for an exercise, the heart will adapt as it becomes more efficient. This will allow you to spend more time in and out of the room for several years.
Introduce the decreasing series method into your training by applying it to a maximum of two exercises per muscle group to avoid overtraining. At the end of each five-week cycle, resume your regular schedule for 6-8 weeks before returning to the declining sets, but this time with a slightly heavier load than the previous cycle.
Try this method: you will find that the profits are always increasing. For those looking for a way to kick-start their muscles and improve their cardiovascular health at the same time, this alternative method is ideal.
Next Post Previous Post
No Comment
Add Comment
comment url
exercises,GET FIT