what is the pomegranate benefits? Native to Persia and cultivated around the Mediterranean basin for millennia, pomegranate is one of the oldest fruits. Under its thick bark hide red seeds with a slightly tart flavor and multiple virtues. Nutritional composition, health benefits, advice on choosing, consuming and preserving it... We tell you everything about the pomegranate! 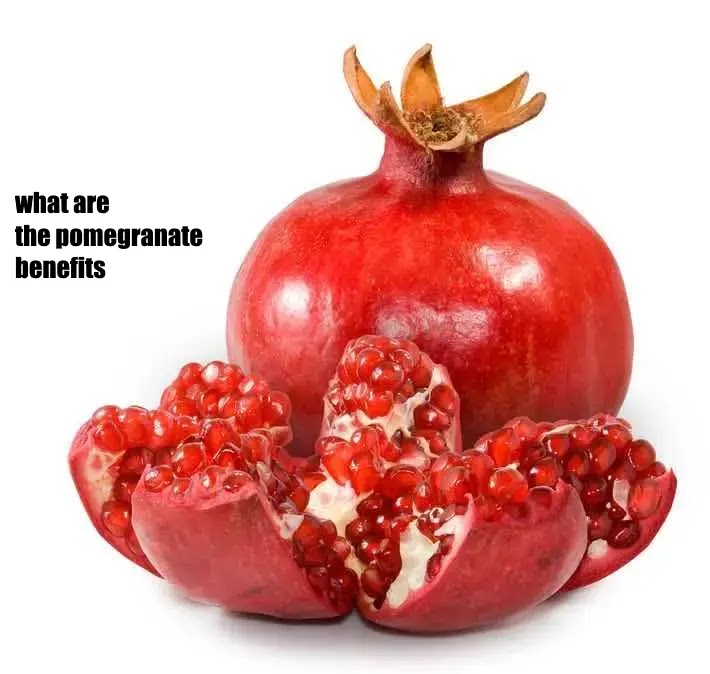 The pomegranate makes its appearance in autumn: its full season extends from November to February. It is the fruit of the pomegranate tree, a tree that resists high heat and requires very little water. There are many varieties of pomegranates. Its flavor is sweet, sweet, slightly tart and refreshing, depending on the variety. Its seeds can be consumed as is or in juice.

The nutritional composition of pomegranate

On the macronutrient side, carbohydrates dominate. On the micronutrient side, it contains vitamin C, vitamins of group B, antioxidant substances (polyphenols, anthocyanins, tannins ...) and potassium.

Pomegranate provides 83 kcal per 100 g and this energy is mainly provided in the form of carbohydrates. This fruit is indeed composed of 14 g of carbohydrates per 100 g. This carbohydrate content is higher than the average of fresh fruit. For the rest of the macronutrients, pomegranate contains only 1 g of protein and 0.4 g of fat per 100 g.

A GOOD SOURCE OF VITAMIN C

The vitamin intake of pomegranate is largely dominated by vitamin C. It provides 10.2 mg per 100 g, the equivalent of 11.28% of the NRVs (Nutritional Reference Values). This content is well above that of the majority of fresh fruits.

A FRUIT VERY RICH IN ANTIOXIDANTS

Pomegranate is known to be very rich in antioxidant molecules. Among these molecules, there is a good amount of polyphenols (1.10 mg per 100 g), mainly composed of flavanols, of the flavonoid family. It also contains anthocyanins (the origin of its red color) and tannins. Thus, the antioxidant properties of pomegranate would be 2 to 3 times higher than those of green tea or red wine.

Pomegranate also provides a good dose of minerals and trace elements (700 mg per 100 g). It is potassium that dominates: pomegranate contains 250 mg per 100 g. Athletes have something to celebrate because potassium is highly involved in muscle contraction.

The health benefits of pomegranate

Many studies have looked at the benefits of pomegranate for our health. Here are the main virtues they found for it:

IT WOULD PROTECT AGAINST PROSTATE CANCER

Like all foods rich in polyphenols, pomegranate has anti-carcinogenic properties and has been proven against prostate cancer. An American study of 46 men with this cancer showed that drinking pomegranate juice significantly slowed down the progression of the disease.
Another study conducted on mice highlighted the ability of pomegranate to inhibit the growth of cancer cells in the case of prostate cancer because the tannins of pomegranate concentrate in prostate tissue.

IT WOULD IMPROVE ERECTILE DYSFUNCTION

According to American researchers, drinking a glass of pomegranate juice a day could improve erectile dysfunction. To reach this conclusion, they conducted a study of 53 men with erection problems. As a result, 47% of them observed an improvement by drinking only one glass of pomegranate juice per day.
This would be explained by the ability of the antioxidants in pomegranate to fight against free radicals responsible for damaging the blood vessels involved in erection.

IT WOULD PREVENT CARDIOVASCULAR DISEASE

Pomegranate has also shown its effectiveness in preventing cardiovascular disease. It would improve blood circulation and blood pressure. It would also help to decrease the level of blood lipids responsible for atherosclerosis (a disease in which lipid deposits clog the arteries).
In addition, drinking pomegranate juice would reduce oxidative stress from 28% to 56% at the origin of the aging of the arteries.

IT WOULD PREVENT BRAIN AGING AND ALZHEIMER'S

Pomegranate is said to have a neuroprotective and anti-inflammatory power, protecting us from brain aging and diseases like Alzheimer's. This would be explained by the presence of a molecule called ellagitanin in pomegranate. This molecule, passing through the intestinal flora, would turn into urolithin. It is urolithin that would be endowed with neuroprotective and anti-inflammatory properties.

IT WOULD RELIEVE KIDNEY DISEASE

A study of 101 patients on dialysis concluded that drinking pomegranate juice reduced the risk of complications (diabetes, infections, inflammation, cardiovascular disease, etc.) in people who suffer from kidney disease.
Another study on rats showed that pomegranate juice had a protective effect on the kidneys because it decreased the deposition of crystals in the renal tubes as well as the level of acidity of the urine. Pomegranate juice would therefore help reduce the risk of kidney stones.

IT WOULD BE EFFECTIVE AGAINST ARTHRITIS

A study of mice with rheumatoid arthritis found a 60% decrease in the incidence of arthritis from pomegranate extracts. Joint damage was also decreased. This would be explained by the ability of pomegranate to block the enzymes responsible for the destruction of bone, thus reducing the appearance and progression of arthritis. Other studies have also shown that pomegranate is effective in relieving pain related to osteoarthritis.
Our tips to make the most of the benefits of pomegranate.
Now that you are aware of the benefits of pomegranate, you are surely wondering how to choose it, consume it and store it. Follow our advice!

Several studies (University of Newcastle, ABARAC) have proven that organic fruits (and vegetables) are 30% richer in nutrients and 18% to 69% richer in antioxidants. It would be a shame to miss the precious antioxidant substances of pomegranate, which are the source of its many benefits. Choose it organic!

CHECK WHERE IT COMES FROM

Although there are a few pomegranate producers in the south of France, the majority of pomegranates marketed in France are imported. Choose those that come from a neighboring country such as Spain or Italy, because they can also come from far away (California, India, Iran, Tunisia, Turkey ...).

CHECK THAT IT IS RIPE AT THE TIME OF PURCHASE

Pomegranate is a non-climacteric fruit. Otherwise said, it no longer ripens after harvest. It is therefore important to choose it well ripe. You can recognize a ripe pomegranate by its bark: it should be shiny, smooth and should not appear parched. Also check its color: it must be red.

POMEGRANATE SEEDS ARE EATEN AS IS OR IN JUICE

Cut the pomegranate in half and remove the seeds by hand or with a fork. The seeds can be consumed as is or in juice. Their flavor goes well with both sweet and salty. Integrate them into your sweet dishes (coulis, ice cream, juice, syrup, sorbet, pie ...) or in your savory dishes (cheese, fish, salad, sauce, meat ...).

Pomegranate is usually eaten raw and it is preferable because cooking makes it lose its nutritional qualities, including its precious vitamin C. In addition, the heat of cooking makes its seeds burst: the juice escapes and loses its fragrance very quickly. If you decide to consume it cooked, make sure that the cooking is gentle.

THIS FRUIT IS KEPT AT ROOM TEMPERATURE FOR ABOUT TEN DAYS

Once purchased, there is no need to refrigerate it before consuming it. You can keep it at room temperature for about ten days. Once opened, the seeds can be kept for a few days in an airtight jar in the cool. Some preparations allow you to keep it longer: jam, syrup...

What to remember about the pomegranate

Pomegranate has been a strong success in Western countries since studies have revealed its properties against osteoarthritis, prostate cancer, cardiovascular diseases or age-related diseases. This is especially the case in Britain where sales of pomegranate juice have exploded.
Thanks to its strong antioxidant power, it helps fight oxidative stress and inflammation at the origin of many chronic pathologies (cancer, Alzheimer's disease, heart disease ...).
It is valuable for men's health since it protects against prostate cancer and improves erection problems. It is also perfectly suited to the nutritional needs of adolescents, children and women. It also helps to meet the potassium needs of athletes.
Choose it preferably organic and French or from a European country. Consume its seeds as is or in the form of juice. Avoid cooking because it causes it to lose its precious micronutrients and antioxidant substances (polyphenols, vitamin C ...).
Next Post Previous Post
No Comment
Add Comment
comment url